A 15-year-old girl was taken off a British Airways flight in Cape Town on Sunday, after her relative’s contacted authorities reporting her disappearance from her parent’s home. 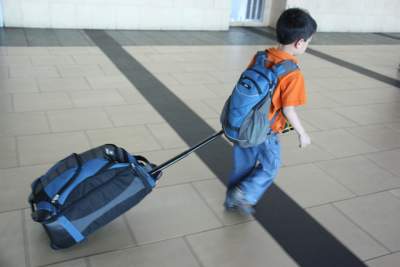 A 15-year-old girl was taken off a British Airways flight in Cape Town on Sunday, after her relative’s contacted authorities reporting her disappearance from her parent’s home.

According to the Department of Home Affair’s spokesperson, Mayihlome Tshwete, had the rule which requires an unabridged birth certificate detailing particulars for both the mother and father, to be supplied by the parents for all children travelling through, into and out of South Africa - been in place there is no way the teenage girl would have been able to leave Cape Town for Johannesburg, let alone the country.

"It is only because of the vigilance of the airline that this did not turn out worse," said Tshwete.

“What this unfortunate incident has brought to the fore is an example of the scary instances the department of home affairs has to deal with on a regular basis,” he added, saying that “We deal with instances of unaccompanied minors, where children travel with an aunt or uncle without their parents’ consent all the time, only to have one non-consenting parent hold the department accountable asking, ‘Why did you let my child leave the country?’”

“This only serves to highlight the importance of the unabridged birth certificate ruling, since the department of home affairs has a responsibility, as a signatory member of the UN Child Protection convention, to close all loopholes and protect the most vulnerable in our society.”

The unabridged birth certificate requirement is seen by many within the tourism industry as a potential barrier for foreign visitors to South Africa since in some instances it requires a considerable amount of additional travelling, time and money it initially came into effect at the end of May 2014 but was later postponed. Tourism Minister Derek Hanekom has since requested an extension of the unabridged birth certificate ruling, which will once again come into effect on 1 June 2015.

At a recent tourism conference held in Johannesburg Hanekom said, “We cannot sweep under the carpet the fact that SA’s current visa regulations are widely seen as a significant obstacle to increasing travel to the country."

But in the first major local instance of how minors are put at risk and can potentially be manipulated into leaving the country, Tshwete said, “Every time we postpone this rule, we are accountable and more children are then at risk.”

Tshwete confirmed that the department of home affairs was in consultation with the department of tourism as well as other key tourism stakeholders such as the Tourism Business Council of South Africa to address the effects of the country’s news visa and immigration rules.

“The expert panel will be meeting later in April but as it stands the unabridged birth certificate is set to come into effect on 1 June, as previously stipulated.”
Source: Traveller24