Gigaba re-iterated that those migrants who enter the country through the various border posts are all in compliance with immigration regulations and by entering the republic they play an important role in integrating South Africa into the global community. 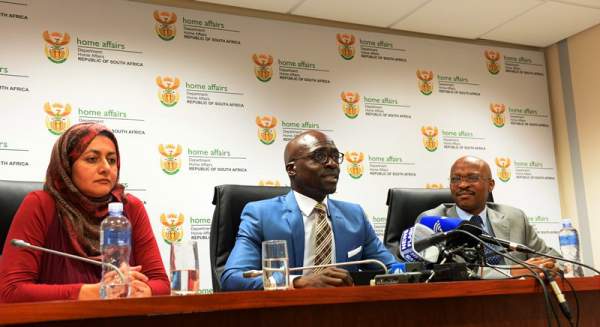 Furthering his commitments, to citizens and migrants alike, Gigaba announced that more than R118 million will be spent on employing 170 immigration inspectors specifically aimed at bringing companies, who employ undocumented foreigners, to book.

In this shortened version of Gigbaba’s speech he calls for calm among citizens and perspective in terms of the important role foreign nationals play in South Africa while assuring South Africans that all is being done to ensure that their own culture and livelihoods are not being put at risk.

“From the outset, we would like to make the emphatic statement that most foreign nationals in South Africa make a very positive contribution to our society and economy.
“First and foremost, immigrants contribute towards our country’s economic development by investment in the economy, supplying critical skills including in our health facilities, teaching our children and youth in schools and universities and thus transferring their knowledge and skills to them.

“Accordingly, these people pay tax which contributes towards expanding the national fiscus whilst many still have to send remittances back to their families in the countries of origin and yet still sustain themselves and their livelihoods in South Africa.

“Furthermore, many nationals of our neighbouring countries travel to South Africa daily, weekly or monthly to buy their groceries or purchase goods from our retail shops to go sell in their countries, paying toll fees on our roads and thus contributing towards revenue generation that has been so vital towards increased both social as well as economic expenditure to benefit South Africans.

“Secondly, by entering our country through our designated ports of entry as regular migrants, and by complying with both our immigration and other legislation, most foreign nationals contribute towards enhancing South Africa’s national security and ensure that we can manage the visitors in our midst, whilst we can protect both these visitors in our country as well as South Africans.

“Thirdly, immigrants in our country contribute towards nation-building and enhance our social cohesion by bringing more diversity to our nation and creating more understanding of the diverse nature, not only of Africans of Africa but also of the peoples of the world.
“By having new groups of immigrants in South Africa in the recent years, we have become a more cosmopolitan country and our understanding of who we are as a nation has been deepened, based on the new complex dynamics that have enriched our nation.

“Today, for example, you have new entrants into the South African nation that are not rigidly part of an African majority, but who are part of both the African majority and the immigrant minority at the same time; whose home languages are none of those we have come to know over the centuries of the formation of our nation.

“Fourthly, immigrants have integrated South Africa into the global community and African immigrants in particular have made South Africa an integral part of the African continent that we rightfully are.

“Every country on the continent can find its nationals on our shores; and, in some instances we now have South Africans of descent in fellow African countries.

“We, as a people, are better and more human than we have ever been because of these fellow Africans and peoples of elsewhere in the world that have chosen voluntarily, and mostly through regular means, to live amongst us and make South Africa their permanent home.
“The children of these people do not know the countries of origin of their parents and will only relate to them as Indian and white South Africans relate to India or Europe – the countries of ancestry of their forebears; but their home is now and in the future, South Africa.

“We must accordingly be very clear that immigrants are welcome in South Africa.

The irrefutable fact is that it is inaccurate and incorrect to claim that:

“African tourists have increased by leaps and bounds in South Africa, arriving through OR Tambo International Airport and our land ports of entry.

“The towns of Nkomazi, Musina, Ficksburg, and even Nelspruit, Polokwane and Mangaung benefit enormously from the revenue they generate from our neighbours.

“Most immigrants in our country, particularly the African immigrants who are currently the subject of our attention, enter South Africa properly as regular migrants with documents and therefore in this country legally.

“Where some have entered the country irregularly, without documents and illegally, the Immigration Services of the Department of Home Affairs have been deporting them yearly at the cost of hundreds of millions of rand per annum.

“At the same time, in addition to the regulations announced in May last year, the Department of Home Affairs is working hard towards a new International Migration White Paper, to overhaul to 1999 policy framework, in which new framework new migration management approaches will be introduced in order to enhance our international migration management.

“The new policy framework will be more clearer, amongst others, on
• how to manage economic migration in South Africa,
• how to address the question of the regulation of the shops owned by foreign nationals, and
• how to ensure that foreign nationals whose visas entitle them to work in South Africa are not employed outside the provisions of the Basic Conditions of Employment Act so that their employment does not lower wages and conditions of employment, which often tends to disadvantage South Africans.

“In addition to this, the Department of Home Affairs will be spending R118 million over the next three years recruiting Inspectors in order to increase its inspectorate capacity to detect and prosecute companies employing undocumented migrants, or those without work visas.

“Hundred and Seventy (170) inspectors will be recruited in year one, increasing marginally over the next two years.