South African Family Shares their Story of Emigrating to Australia

“We should have emigrated sooner,” so says a South African who recently emigrated to Australia on work visa.

We caught up with Eugene Vosloo and his family who, in 2019, emigrated to Australia.  They shared their tips and told us about the whole emigration experience.  In the first of this two-part series we get to know the Vosloo Family and hear about their adjustment to life in Australia. 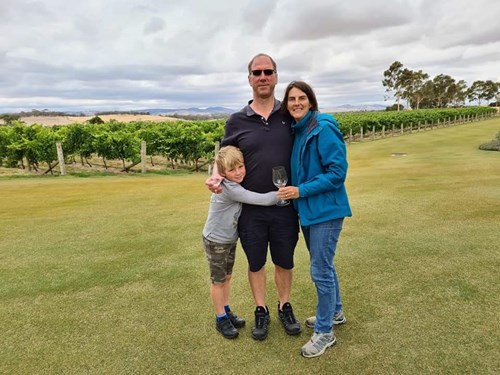 Eugene his wife Louise and their 7 year-old son Laurens lived in South Africa all their life but made the decision to pack up and sell their house in Hermanus to move to Australia.  The family currently lives in Portland a city 362km South of Melbourne in Australia. Eugene’s older son will join the family soon.

Portland is a city on the South-West coast of Victoria, Australia and is the site of Victoria's first permanent European settlement.  The city is well-known for its established fishing industry and caning factory which supplies work to many of the almost 11,000 residents.

The important harbour enabled the development of the woolgrowing industry and plays a huge role in the local economy which was also boosted by the tourism industry and an aluminium smelter.

“My wife Louise and I decided to emigrate after our current Australia-based employer offered us employment and support in obtaining our work visas,” explains Eugene.  “It has been a decision we came to in an effort to provide a better quality of life and a more stable future for us and our sons.”

Eugene adds that his family chose Australia as their emigration destination based on the country’s international reputation as a First World country, Australia’s political and economic stability added to its attraction and the country’s relaxed life style. “The state of Victoria was our first choice in terms of choosing where to live.  We particularly like the cooler climate.  The fact that the state offers World Class schools and universities is very important for us as we have young children.”

For a relatively small community of only 10,900 resident Portland offers a lot of options when it comes to choosing schools and facilities for tertiary education. Portlanders have no less than 8 Primary Schools and 3 High Schools to choose from!

According to the Melbourne City Institute of Education the state is definitely very committed to quality education.  The Victoria state government has invested no less than AUD $8.5 billion into building a system that gives the state’s students the skills, knowledge and attributes they need to thrive in life.  The Victorian government also offers a range of free TAFE courses for tertiary students, and subsidized many others.

When asked how Afrikaans speaking young Laurens had adjusted to the new school environment both parents agreed that their 7 year-old had made a full and happy adjustment. “Laurens adjusted very well to grade one in Australia!  In fact after some English classes Laurens is now completely bilingual and excels both in the class room, socially and on the sports field.

In part two we will ask the Vosloo’s about their move, their visa and they will share tips anyone considering the move Down Under will find useful.